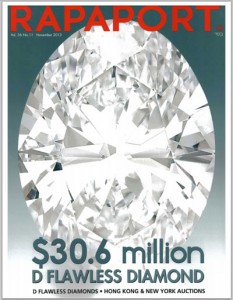 When one thinks of jewelry design, most of the names that come immediately to mind are European design houses in countries with an established history and tradition of jewelry making. However, the U.S. is catching up with a new generation of contemporary jewelry artists that is taking design to new places, while making a name for American jewelry designers. Showcasing that new paradigm is the exhibition, “Variations on a Theme: 25 Years of Design from the AJDC,” running now through February 22, 2014, at The Forbes Galleries in New York City.

In 1988, a group of jewelry designers got together and formed the American Jewelry Design Council (AJDC), a nonprofit educational corporation dedicated to educating and promoting jewelry as an art. The founding designers were Henry Dunay, Jill Canaparo, Ron Hartgrove, Whitney Boin, Marty Gruber, Michael Bondanza, Michael Good and Jose Hess. There are currently some 40 members in the AJDC, which occasionally invites new designers to join.

ART VERSUS TRADITION
When the AJDC was formed, American jewelry designers were not particularly recognized and European designers were considered superior. As a relatively new country, the U.S. does not have the longstanding tradition of jewelry that is prevalent in Europe, nor does the U.S. have royalty that brings with it a heritage of jewels. In Europe, jewelry making is a highly regarded profession backed by a rigorous training and apprenticeship process.

The U.S., however, is different. Many jewelry designers in this country are trained as artists who choose to express themselves through precious metals and gems, or other materials that adorn the body. “It was thought that American jewelry design lagged behind because they did not have the classical training that the European jewelry designers have,” explains Barbara Heinrich, president, AJDC. “American designers don’t necessarily have a background in jewelry, but they have art degrees. All of the designers in this exhibition own companies and make jewelry and they innovate as designers and artists. It’s not the same as in Europe, where you study jewelry design and the professor makes one piece a year. This is a very American phenomenon.”

THE PROJECT
Eight years after the AJDC was conceived, the group decided to create an annual Design Project. Designers were given a single theme and were asked to create a piece of jewelry around that motif. The jewelry was not designed for sale, but rather as a unique piece expressing imagination and creativity. “Early on, we were talking as a group and we came up with the idea to do something at the JA show that would attract more attention to us,” recounts founding member Bondanza. “Every year, a committee is formed and comes up with a theme for the project. It has to be wearable jewelry because that is what we are about.”

Themes have included The Mona Lisa, Black and White, Key, Flight, Secret Treasure and numerous others. It is a selection of the jewelry designed for those projects, ranging from the first one in 1996 through the current one in 2013, which is now on display to the general public for the first time at The Forbes Galleries. Prior to this exhibit, the projects were displayed to the industry at major trade shows every year. “We’ve been doing a project a year for the past 17 years. We don’t do it to sell, we do it for art’s sake and to demonstrate American jewelry design and to elevate American jewelry design,” comments Hess, another of the AJDC’s founding members. “We want the public to be aware of how much fine jewelry work is done in the U.S. We are American designers creating.”

However, the council, in keeping with its mission to educate the public, had been looking for new venues in which to display the Design Project to a wider audience outside the industry. Member Linda MacNeil, whose work is shown in a number of gallery settings, was asked if she could find a venue for the collection. “I have always admired The Forbes Galleries. It was home to the Forbes family Fabergé Eggs collection. I thought this was a perfect place for the AJDC,” says the New Hampshire–based jewelry artist. “I went to New York and had a meeting with Bonnie Kirschstein, who curated the show. I told her about the AJDC projects and explained who the designers are. About a month went by and she got back to me and said, ‘Yes.’”

Kirschstein, managing director, The Forbes Collection, was intrigued by the idea of doing an exhibition with contemporary designers. In order to bring together the pieces for the exhibit, AJDC members were asked to submit three to five images of projects that they liked. Selections were then made to represent each theme. “We’d never done a completely contemporary designer show where all of them are currently working. A lot of these designers are less commercial. I like the idea of a group who are all working on the same thing,” Kirschstein concludes.
Going forward, the AJDC plans to travel the exhibition to other venues in the U.S. and perhaps even globally to fulfill its mission of elevating awareness of American jewelry design.

Article from the Rapaport Magazine – November 2013.