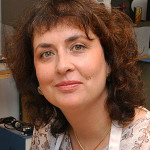 Cornelia Goldsmith, born in Berlin, Germany, grew up with a fervent desire to make jewelry from an early age. From as far back as she can remember, timeless summers were spent with her sister scouring the beaches of the Baltic Sea, always on the lookout for small pieces of golden amber amongst the sand and rocks. This Baltic amber along with other small “treasures” of varying shapes and colors ended up in her very first creations of earrings and bracelets. Upon moving to the United States in 1988 she enrolled in her first jewelry making classes at the Massachusetts College of Art and two years later transferred into the local technical program at the North Bennett Street School in Boston’s North End. It was during her study under Cecelia Bauer in New York, however, when Goldsmith discovered the use of granulation for her art. She now says that the technique quickly made it’s way into her jewelry designs.

Today, her jewelry design masterfully incorporates a variety of labor intense methods and techniques such as hand fabrication, chasing, engraving and chain making. A uniquely adapted use of ancient granulation techniques lend Cornelia Goldsmith jewels the signature look for which they have become known. Cornelia Goldsmith designs ultimately showcase an appreciation for exacting craftsmanship and fine detail, while at the same time expressing a unique vision of the natural world. In keeping with Goldsmith’s beliefs that we must act as stewards for the planet and of the environment, she seeks to use conflict-free and recycled materials when and wherever possible.

During her career, Cornelia Goldsmith has won numerous awards for excellence including the MJSA Vision Award. She has been featured in various books and publications such as the noteworthy Art Jewelry Today (volumes 1, 2 and 3) and Lark Books “500 Brooches”. Goldsmith’s jewelry has been featured on the covers of Ornament Magazine, Lapidary Journal and AJM among many others.