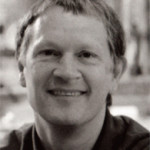 Master goldsmith and jewelry designer Kent Raible first started working metal in 1973 in a high school jewelry class, and has since become one of the leading studio goldsmiths in the country. Largely self-taught, Kent sought out talented teachers over the years to learn different aspects of jewelry making, and also went abroad in the 1980’s for two years of study in Germany. He always worked in his own studio, never apprenticed under a master, and over time developed a unique style of fabrication using eighteen karat gold, fabulous colored gemstones, and the ancient technique of granulation.

His work has won many national and international awards, and has been featured in two
important national exhibitions. The major neckpiece named Floating City is part of the
permanent collection of the Renwick Gallery of the Smithsonian’s American Art Museum, and his object called Pregnant Chalice was included in The Art of Gold, a survey of the work of eighty contemporary American studio goldsmiths that toured the country throughout 2005.

Since the 1980’s, Kent has also been teaching his craft through workshops at various institutions such as the Penland school of Arts and Crafts in South Carolina and the Revere Academy in San Francisco, California.

Kent currently resides in Washington state with his wife and partner, Lynn.