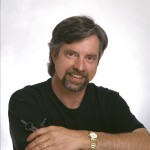 An unparalleled view of the Rocky Mountains is what inspires jewelry designer and goldsmith Scott Keating to produce award-winning designs at his workshop and studio. An avid outdoorsman and skier, Keating says he is comfortable working in “nature’s backyard” and to move anywhere else would compromise the quality of his life and work. That’s why Keating and his wife, sculptor Nancy Lovendahl, operated a custom design shop in Aspen for eight years, attracting loyal clientele from jet-set celebrities such as Jack Nicholson, Jimmy Buffett, Glen Frey, Kate Jackson, Sonny Bono and Jill St. John.

A native of Chicago, Keating studied design and engineering at the University of Illinois under the late master goldsmith Robert Von Neuman. It was there he met his wife. The couple moved to Aspen in 1973 where Scott’s early career started by designing and making silver jewelry at his one showcase shop. As the years passed and Scott’s talents expanded, soon he was working in only precious stones and gold. By 1978, he established his own design salon.

Those years of making one-of-a-kind custom pieces evolved into a strong foundation of designs. Keating became inspired to put them together to create a signature collection. He reorganized his business to become a wholesale venture to focus on this collection.

In 1985, Keating was chosen to be one of 12 exhibitors at the prestigious Jewelers of America “New Designers Room” in New York City. His premiere was in what has become a collaboration in business and design with Nancy. The designer has a team of jewelers working with him to make designs in platinum, gold and silver which have won him the “Diamonds of Distinction” award from De Beers and a “Designer of the 90’s” award from Jeweler’s Circular-Keystone Magazine.

Keating’s jewelry includes, Diamonds, Karat Gold and Platinum featuring a wide variety of colored gemstones such as tourmaline, citrine, and amethyst. He has designed new cuts for gemstones, such as his trademark Turret bar-cut. His breakthrough line, the Summit Collection, features rings, earrings, necklaces and bracelets set with these faceted or carved cabochon turret cut gemstones and tiny, perfect lines of black enamel or diamond channels. All of his gold mesh is handwoven recalling classic watchbands of the Deco era.

Beside Egyptian and Deco influences, Keating says that nature is probably the single most important source for his creations. All of his designs are proportioned using the same size relationships in nature, used in many artists’ work from the Renaissance known as Sacred Proportions or Sacred Geometry. DaVinci’s artwork is a classic example of Sacred Proportions as his “Vitruvian Man” is a well known example. He says his goal is to live in harmony with nature and this philosophy brings spirituality to his pieces. Both Keating and his wife say their motivation is to produce designs of integrity and inspiration to the wearer. He asserts that “I find inspiration in earth metals and stones, and adding my love of jewelry making translates the work into wearable art.