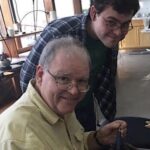 Thomas is the founder of Seven Fingers Jewelers and he has had a long career as a jewelry designer and teacher. In 2013, his son Ethan joined him in the studio.

He has exhibited at many of the major select Craft shows, such as the Smithsonian and the Philadelphia Museum Show. and has been featured in numerous magazines.

His work has been exhibited in many museums and galleries, and in 2021 his “Blue Snow Brooch” was purchased by the Philadelphia Museum of Art for its permanent collection.