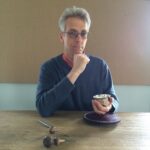 Thomas (Tim) McClelland was born in 1957 in Goodison, Michigan, a rural town north of Detroit. His family was artistic, musical and had a good sense of humor. In his public high school, he saw an art student melt and cast silver coins into a small sculpture. From that moment he decided he was going to work in metal. He started making jewelry and took night courses at Cranbrook Institute of Science.

In 1975, he enrolled in Boston University’s Program in Artisanry. At the same time, he began working at Boston’s venerable jewelry store, Shreve Crump & Low. These two worlds, the European jewelry making tradition and the free spirit of contemporary art, have informed Tim’s work up to the present time.

After college, Tim moved to New York City and became a freelance jeweler. Moving to the Berkshire Hills of Western Massachusetts with his young family in 1996, Tim cofounded and became the artistic and design director of McTeigue & McClelland Jewelers.

As Tim enters a new moment of his creative life, he is grateful to have found an ongoing creative outlet that is so meaningful to him. Helping him along the way are his many close friends and relatives, his two rescued pit bulls, his unusually wonderful daughters, and his perfect wife.

“I try to make beautiful, original jewelry. If I had to choose, I would rather it be original and sort of odd, than beautiful and derivative. The idea of beauty needs to originate somewhere.”