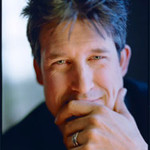 Whitney Boin designs precious jewelry with his hands and his heart. He has a reputation as one of the most innovative and technically proficient jewelry designers in the world. His award-winning original designs for engagement rings, diamond necklaces and pearl bracelets have propelled him to international acclaim. His pieces are found at prestigious galleries and stores in the United States and England.

The story of how he became recognized as an artist and a leader in the field is a tribute to his innate talent. Born in New Jersey to parents who were craftsmen, Whitney Boin began making art in high school. He won his first awards, The Golden Hammer Award for a mahogany table, and several Scholastic Golden Keys Awards for jewelry design and sculpture, when he was 17. “I found out that the process of creating jewelry was an intense struggle to come up with a different solution, followed by a defining moment when it all comes together,” Boin remembers. “I was as surprised as anyone that jewelry would completely change my life.”